The legal position of the US government in the Western Shoshone case before the IACHR is a narrative of racial supremacy and animus towards the Indigenous Peoples that pretends to argue that the “gradual encroachment” of US settler state constituents over Western Shoshone traditional territories is a legal justification for dispossession and environmental destruction.  “Encroachment” is not a valid legal theory, it is only an excuse, in this case a bad excuse.  Besides the fact that encroachment presumes a recognized right of possession over what is being encroached upon, in this case Western Shoshone Territories affirmed in the 1863 Treaty of Ruby Valley, the action of encroachment never eliminates this preceding underlying interest.  Encroachment of the settler state domestic system of fee simple patent of private individual property interests only subverts the underlying and persisting Indigenous title and rights or imposes upon it in the form of a subsequent (in time) set of interests.

The “gradual encroachment” theory in the Western Shoshone case by the US government is the evil twin of the theory of “laches” that the state of New York used against the Onondaga Nation when it attempted to correct a similar territorial issue of international import before the US Supreme Court in 2016.  Both theories contemplate an extended a period of time, one forwards and the other backwards, and officialize this version of settler state history, ignoring and subverting the historical evidence of the territorial responsibilities and rights of the Original Nations of Indigenous Peoples of the territories in question.  These cases are classic narratives of description of the jurisprudence of the Forked Tongue Folk when it comes to Indigenous Peoples, where law is practiced but justice is never delivered.

Historically, just as the Haudenosaunee Confederacy saw the arrival and departure of the Dutch and the French in their territories, the Shoshone Nation also saw the coming and going of Spain and Mexico. New York was originally called New Amsterdam by these folks, and Nevada is a term that originates in the Spanish geography of the Empire of New Spain which the Republic of Mexico integrated into the formation of the Republic of Mexico in 1821.

Before proceeding further, clarifications are required, contemporary principles of international justice and non-discrimination must be established:

All subsequent arguments by the US government in the Western Shoshone case presume that the legal validity of the “title to the land in question” ceded to the US by the Treaty of Guadalupe Hidalgo (1848) with Mexico is unquestioned, has never been questioned, and never will be questioned in a venue of jurisdiction where the principle of justice is the law that governs the rules. Not just the law of the rulers.

Sub Commission on Prevention of Discrimination and Protection of Minorities

Study on treaties, agreements and other constructive arrangements between States and indigenous populations

“The concept of the ‘rule of law’ began to traverse a long path, today in a new phase, towards transformation into ‘the law of the rulers’.

The “treatment” of Shoshone ancestral territories by inscription into the public land patent system of the US real estate system of dominion originates in the Common Law of England, exemplified by the enclosures of the crown. According to this claim, the process is identified in the Western Shoshone case as “inverse condemnation” via the gradual encroachment of settler state constituents encouraged to move into the territory by the US government.

This line of argument has been upheld in the US courts by decisions that affirm extinguishment of Shoshone land title by the inverse condemnation of gradual encroachment, and the claim that the Treaty of Ruby Valley “was not intended to acknowledge Shoshone title to lands covered by it.”

In terms of the proceedings within the US Indian Claims Commission’s case regarding the Shoshone territories referenced in the 1863 Treaty of Ruby Valley, the fraudulent claim of extinguishment in 1872 is compounded by the attempts of the US government to hide the racist and discriminatory nature of the bureaucratic dispossession of Indigenous Peoples from their ancestral homelands in the Indian Claims Commission proceedings.  Against these forces of extinguishment, expropriation and exploitation, the Dann sisters, Mary and Carrie, gave their entire lives in full force of battle as indigenous women of the Western Shoshone Nation.  Mary Dann passed away in 2005 and Carrie Dann has now joined her sister in the Spirit World in January of 2021.

Yet in none of these proceedings and determinations has the legal issue which is the contextual core of the dispute been raised that could clarify the fundamental question:

Specifically, what is the legal foundation for the claim that the government of Mexico in 1848 had authorization to transfer valid land title and jurisdiction, in this case over Western Shoshone territory, to the US government?

The US-Mexico international border is today a fully functioning instrument of empire. It is simultaneously a 2,000-mile-long scar and an open wound. The border is a militarized monument to white supremacy formulated and made necessary by the racist ideology of American Manifest Destiny, both in its historical expression which was the motivation for the war with Mexico in 1846, and its present contemporary “Festering Destiny” extrapolation in the form of the “Trump Wall” border project. The pathological racist tenets of Manifest Destiny, both past and present, are rooted in the false narrative of cultural supremacy of Christendom, whose geopolitical context of “America” has been informed, normalized, and institutionalized by the Doctrine of Discovery. The historical meme of collective cognition being Christopher Columbus and the date of October 12, 1492 (Gregorian).

The US government had announced its intention to recognize the independence of the Spanish-American colonies in 1822, Spain did not recognize Mexico's independence until the Santa María–Calatrava Treaty of December 28, 1836. This was the first case in which the Spanish monarchy acknowledged the independence of a state that had been erected within the limits of her former colonial empire in the New World."

Under the terms of the Santa María–Calatrava Treaty of December 28, 1836 the dominions of Mexico were to be comprised of the former Viceroyalty of New Spain, the captaincy-general of Yucatan, the commandancies of the eastern and the western interior provinces, lower and upper California, along with the annexed territories and adjacent islands.  The source of the original purported territorial claim by the Viceroyalty of New Spain in Mexico which was transferred to the Mexico was the royal charters given to Columbus by the monarchy of Spain in 1492 and affirmed from the pinnacle of the imperial structure of Christendom (the Vatican) by Pope Alexander VI via the Papal Bull Inter Caetera of 1493.

As recently as 2016, the Indigenous Peoples of Mexico have called upon the Vatican State and Pope Francis to repudiate the Doctrine of Discovery and revoke the Papal Bull Inter Caetera of Pope Alexander VI 1493 as the basis for the legal concept of "original property of the nation", under which the current government of the Republic of Mexico presumes to make delivery of the territories of the Original Nations of Indigenous Peoples to national and international industries for resource extraction, mining and neo-extractivism in general in violation of the right of Free, Prior and Informed Consent (FPIC).

Posted by chantlaca at 12:34 PM No comments: 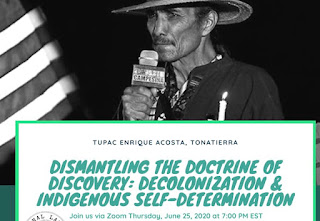 Guest speaker, Tupac Enrique Acosta from TONATIERRA in Phoenix, Arizona, will speak in this foundational webinar kicking-off our webinar series, laying the groundwork for understanding the importance of decolonization and exploring the impacts of neocolonialism. Discussion on US Mexico Canada Agreement (USMCA) and forced disappearance of the 43 Ayotzinapa students on September 26, 2014.


Elements of Process: A Dismantling Methodology

2) Consciousness: Develop a personal critical consciousness on the issues which are pervaded by the institutionalization of the Doctrine of Discovery from the local-regional, continental-global context.

3) Reveal: Create a shared community understanding on how the dehumanizing principles of the Doctrine of Discovery are relevant today and continue to provide the cultural framework for the ongoing colonization and genocide of the Original Nations of this continent, the Great Turtle Island Abya Yala.

4) Take a position. Denounce and repudiate the Doctrine of Discovery and the underlying pathological schema of patriarchy: DOMINATION.

5) DISMANTLE: Take action, and follow through with inter-generational decolonization strategies.

Tupac at North with West
"If you want to stay in America you might just get deported back into colonization, however, we're headed toward Liberation!" 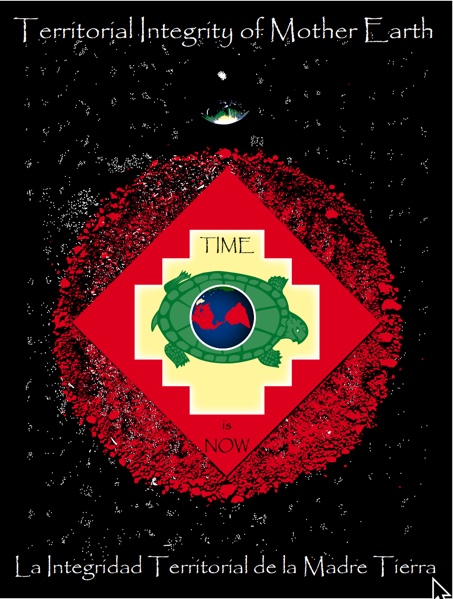 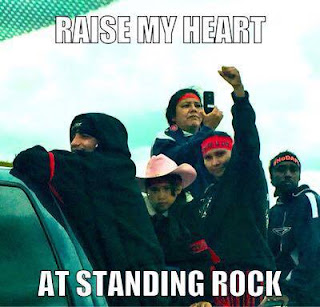 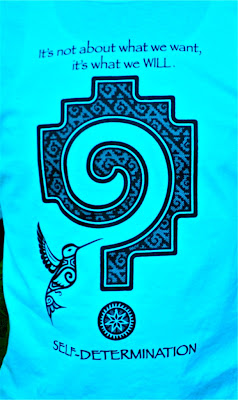 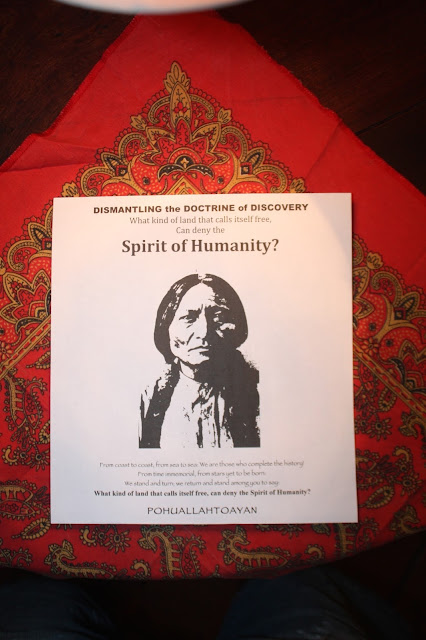 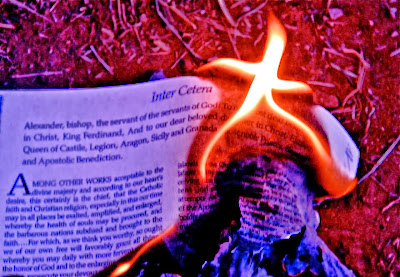