“The Doctrine of Extinguishment”

My name is Rob Williams. I am a member of the Lumbee Indian Tribe of North Carolina in the United States, and a professor of law and American Indian Studies at the University of Arizona.
I want to begin my presentation with a quote from Vine Deloria, Jr., the pre-eminent Native American scholar of the twentieth century. In his essay entitled “Trickster and Messiah” Deloria wrote:

The burning question that should occupy our time should concern where the complex of ideas that constitute Western civilization originated, how they originated, and whether they have any realistic correspondence to what we can observe and experience in nature.

But let us consider this “complex of ideas” to which the Doctrine belongs, and the contemporary relevance of these ideas to indigenous peoples in the world who were not colonized by the West. Without question, the Doctrine’s most important principle, its central animating idea, is the principle of extinguishment.

Under this principle, the colonizing State asserts the power to extinguish indigenous peoples’ property rights in their traditional lands and their rights to self-determination in those lands. Under the Doctrine, the State also has the power, in essence, to extinguish our languages and religions, and even our existence by recognizing some, and not recognizing other indigenous peoples as being indigenous. The State, under this power of extinguishment, can even terminate that very act of recognition if it so desires with impunity.

The reality is that this extraordinary power of extinguishment that is part of the “complex of ideas” that constitutes the Doctrine of Discovery, has in fact also been adopted by governments in Asia, Africa, Europe and throughout the world. So, to dispense with Western euphemisms like “discovery,” “conquest,” or “terra nullius,” the “burning question” we really should be discussing today involves the “Doctrine of Extinguishment” of indigenous peoples’ human rights around the world.

The Doctrine of Discovery then, is just one minor cultural variation on a broader genocidal power asserted by governments over indigenous peoples generally. This Doctrine of Extinguishment is I contend, the central problem confronting the global human rights movement of indigenous peoples in the world today.

To borrow from Vine Deloria, then, the “burning question” that should occupy our time is where did the “complex of ideas” that helped to spawn this Doctrine of Extinguishment originate, how did these ideas originate and do they have any realistic correspondence to what we can observe and experience in nature?

The answer to that more globalized question, will, to a degree, depend on the historical experiences of indigenous peoples in each country around the world, but those answers, I believe, will all share in a common theme.

This Doctrine of Extinguishment will typically originate in a language of racism and religious and cultural intolerance which regards indigenous peoples as savage, backwards, and inferior, and therefore an obstacle to the progress and development of a superior form of civilization, the non-indigenous nation-state.

In the West, this racist, dehumanizing language traces back to the ancient Greeks and Romans, who asserted the right to enslave, conquer, colonize and in essence extinguish the cultural existence of any group of peoples they defined as “barbarians.” Those “barbarians,” of course were the indigenous peoples of Europe, Asia and Africa.

Since the Greeks and Romans, Western civilization has been in a state of perpetual war with indigenous peoples around the world. The Catholic Church adopted this same racist language of savagery in the Middle Ages, when it authorized the Crusades to the Holy Lands against the heathen and infidel followers of the Muslim faith.

The Popes spoke this same dehumanizing language in authorizing the conquest, colonization and enslavement of first, Africa and then the entire New World by papal bulls (a term borrowed by the way from the Roman Empire). And governments around the world today continue to speak this same dehumanizing language of savagery whenever they seek to justify their powers of extinguishment over indigenous peoples.

All of us in this room are familiar with this racist language that so-called “civilized” nations use when they assert this genocidal power of extinguishment over the lands and lives and cultural survival of indigenous peoples. Whether they are part of the West, or from Asia, Africa or Europe, all governments share in this complex of racist, dehumanizing ideas. They assume they have the right to extinguish us.

So the “burning question” that we need to address is this: Does the complex of ideas associated with the Doctrine of Extinguishment have any realistic correspondence to what we can observe and experience in nature? The answer to that fundamental question is simple: We cannot and will not be extinguished. We are not savages, we are not barbarians, we are not backwards, inferior, or uncivilized. We are indigenous, we are still here, and we will not be extinguished.

The Navajo grandmothers at Big Mountain will never accept that their human rights can be extinguished.

The Maasei in Kenya will never accept that their human rights can be extinguished.

The Igorot in the Philippines will not accept extinguishment of their human rights, nor will the Yorta Yorta  in Australia.

The Mayan people fighting the Marlin mine in Guatemala, the indigenous peoples of the Amazon fighting the Belo Monte Dam, the Sami and the Inuit of the Artic Circle, the Hmong and Karen, the Ainu, the Maori, the Awas Tingni, and all the indigenous peoples around the world reject the complex of ideas that says that any nation-state from the West, East, North or South  can extinguish us, our traditional lands, our languages, our culture or any of our indigenous human rights.

That is why we are here today, to ask this burning question; What is to be done? How do we move forward in this struggle, the most important indigenous human rights struggle of the 21st century, how do we fight this war against the Doctrine of Extinguishment?

Our guide and our plan, I would contend, must be the Declaration on the Rights of Indigenous Peoples. Not only Article 28 and Article 37 but every single article of the Declaration rejects these racist, dehumanizing principles and the complex of ideas that says the State can extinguish the fundamental human rights and basic human freedoms of indigenous peoples with impunity and without consequence.

Full and effective implementation of the Declaration will extinguish the ability of governments to extinguish us, and that is what we demand. Implementation of course can be achieved in many ways, by lobbying for legislation, by bringing cases in domestic courts, and perhaps even by having the pope in Rome apologize for the Doctrine of Discovery.

I believe one of the most effective strategies for implementation, however, particularly in the vital area of land rights, is through development of the  Declaration’s principles as precedents in the international human rights system, through the universal periodic review process under the Human Rights Council, through UN CERD’s early warning process, through actions brought under ILO 169, and through petitions brought before regional human rights bodies like the African Commission on Human and Peoples Rights, the European Court of Human Rights and the Inter-American human rights system where the Indigenous Peoples Law and Policy Program at the University of Arizona represents the Hul’qumi’num Treaty Group in a human rights case against the government of Canada.

Our goal in that case is simple and direct; implementation of the basic human rights human rights principles of the Declaration that  protect the Hul’qumi’num peoples’ property, self-determination and other human rights in their traditional lands on Vancouver Island from extinguishment through uncompensated State-sanctioned clear-cutting and deforestation activities by private developers.

A victory in that case will make it absolutely clear to Canada that this power of extinguishment is illegitimate under contemporary principles of international law, and will undermine and deny the continuing legitimacy of the Doctrine of Discovery’s principle of extinguishment asserted by Canada and governments around the world.

Bringing these cases is hard work, for the indigenous communities involved and for their lawyers and NGO’s who work with them. They require sustained commitment and oftentimes significant resources. But they can be very effective in securing indigenous peoples' property rights in traditional lands that were previously denied or expropriated under the Doctrine of Extinguishment. They directly challenge the complex of ideas that says that a dehumanizing, racist language of savagery can be used in the 21st century to violate the human rights of indigenous peoples.

These types of actions instead seek to implement a much different language of indigenous rights, the language of universal human rights embodied in the Declaration on the Rights of Indigenous Peoples. Thank you.

Indigenous Peoples Forum on the Doctrine of Discovery Video Record 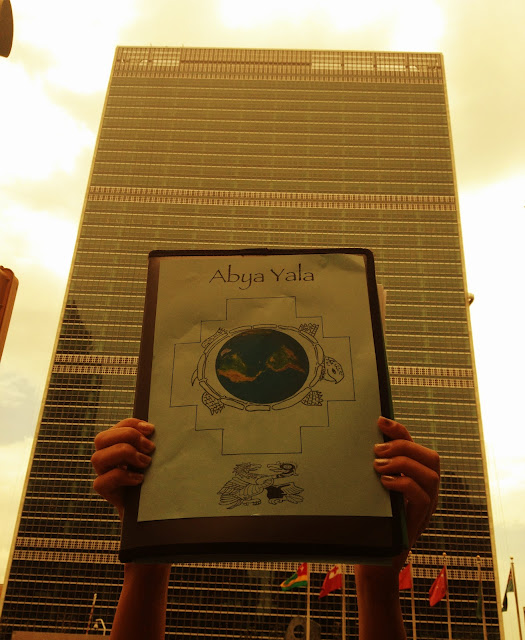 YouTube:
Indigenous Peoples Forum on the Doctrine of Discovery
3 Hours 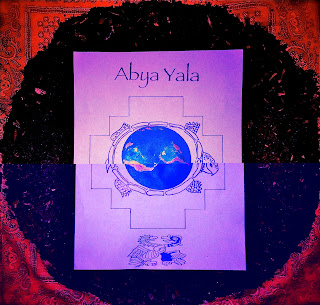 COLUMBUS IS NOT A DAY

Full 3 Hour YouTube Video of the March 23, 2012 Indigenous Peoples Forum on the Doctrine of Discovery held at the Arizona State Capitol House of Representatives:

"This is not anecdotal, this is official. It is official history of the State of Arizona, and by political extension all of the other 49 states of the United States of America. This is not just a cartoon, or an exercise in political rhetoric; it's not just an editorial, a political declaration, or a slogan. This forum actually occurred, in spite of 520 years of genocide of the nations and pueblos of Indigenous Peoples, and as official record before Humanity the proceedings were broadcast live via internet streaming from the floor of the Arizona House of Representatives, and subsequently the entire record of the Indigenous Peoples Forum were submitted to the 11th Session of the UN Permanent Forum for Indigenous Peoples at UN headquarters in NY, May 2012. 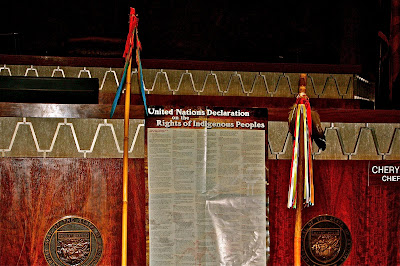